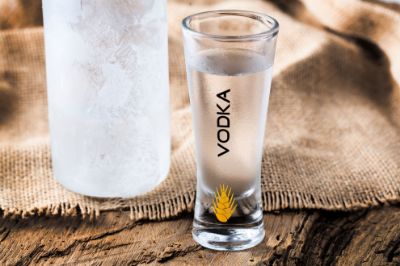 Vodka is a distilled alcoholic beverage made from grains, potatoes, or other fermented substances. Though its exact origin is disputed, it is believed to have first been distilled in either Russia or Poland in the 16th century. Vodka has since become a popular spirit around the world.

Vodka is usually made by distilling an alcoholic mash, which is a mixture of grains or potatoes, water, and yeast. The mash is heated until the alcohol evaporates and the remaining liquid is then distilled and filtered to produce a clear, colorless spirit. Vodka can also be made from fermented fruits or vegetables, but these are not as popular.

Vodka can be aged in barrels, though this is not a common practice. Barrel aging can give vodka a unique flavor profile and can add complexity to the spirit. When vodka is aged in barrels, the wood imparts its own flavor into the vodka, which can range from sweet and spicy to smoky and woody. This aging process can also add smoothness and depth to the taste of the vodka.

Vodka that is aged in barrels is often referred to as barrel-aged vodka or barrel-aged spirits. This type of vodka is usually made from high-quality ingredients and is left to age in the barrel for a specific amount of time. The length of time depends on the type of barrel and the desired flavor profile.

Vodka made from grains or potatoes is usually aged in oak barrels, while vodka made from fermented fruits or vegetables is sometimes aged in different types of barrels, such as cherry or chestnut. Barrel-aged vodka is often expensive, but it can be worth the cost for its unique flavor profile.

Vodka has been around for centuries and is still one of the most popular spirits in the world. While it is often consumed straight, it can also be used in a variety of cocktails and mixed drinks. Barrel-aged vodka can add a unique and complex flavor to your favorite drinks, and can be a great way to enjoy a unique spirit.